Life is a crime drama that premiered on NBC in September 2007 and ended in April 2009.

It stars Damian Lewis as Charlie Crews, a detective recently released from prison after serving twelve years of a life sentence for a triple murder he did not commit. After successfully suing the city of Los Angeles and the LAPD, he is reinstated to the police department and partnered with detective Dani Reese (Sarah Shahi), a former narcotics cop and recovering alcoholic and drug addict.

Garret first appeared on the show in season one as a Russian mobster named Roman Nevikov, the prime suspect in a murder case that involved human trafficking and prostitution. Since he happened to moonlight as a federal informant, Crews and Reese couldn’t touch him at the time.

In season two, Nevikov was the detectives’ go-to guy in another murder case, one in which the clues ended up pointing back at him. He had brought a team of engineers from Russia, had them monitor the site of the new federal building in Los Angeles and then install an identical security system in his club. Once the engineers had completed the project, he killed them to cover his tracks. 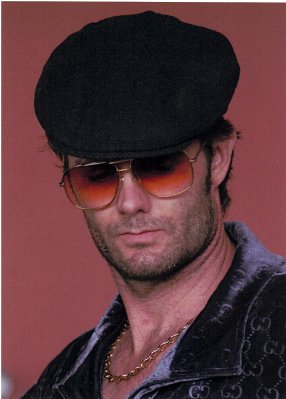 For a time, Nevikov was believed to be in prison. However, when Crews goes to visit him to get information about his partner’s disappearance, he discovers that someone else is serving his sentence for him.

In the final episode of season two (and the series), it is revealed that the show’s big conspiracy group chose Crews instead of Nevikov to take over their money laundering business. For payback, the Russian killed Dani’s father Jack Reese (who was involved in the conspiracy) and, when he failed to capture another player, Mickey Rayborn, he had his lapdogs in the FBI kidnap Dani in order to get Rayborn’s financial details from Crews. And, without going into all the unnecessary gory details, it was all downhill for Nevikov from there.

For clips and pictures from the episodes, click on the links below.

Back to GARRET DILLAHUNT NEWS