Variety has an article about Garret in the Road to the Emmys column. He is on the ballot for best supporting actor in a comedy (and also for best guest actor, for Burn Notice). There was another little article a few weeks ago that I forgot to link, here. A few snippets from Variety:

Dillahunt says he especially had a lot of fun in the show’s vasectomy episode.

“First and last time you’ll probably ever hear the words ‘fun’ and ‘vasectomy’ in the same sentence. Another high point was in ‘Everybody Flirts … Sometimes,” where he got to let his hair down, proverbially, and take his shirt off, literally.

The thesp won’t be lacking for exposure while “Raising Hope” is on hiatus. Continuing his pattern of being, as he says, “pigeonholed as the guy with no pigeon hole,” he appears in this year’s sci-fi/mystery pic “Looper” — with Joseph Gordon-Levitt, Bruce Willis and Emily Blunt — and the thriller “Cogan’s Trade” with Brad Pitt. (…)

“I didn’t expect to be so challenged physically with this character (Burt),” he says. “With all the fight scenes and stunts I’ve done for past roles, I thought this would be easy. But I have been running, jumping, wrestling, lifting and spitting at alpacas. I’m knackered by the end of the week. And I love every minute of it.”

Raising Hope has been nominated for Outstanding Achievement in Comedy by the Television Crititcs Association. It’s up against Parks & Rec, Louie, Modern Family and Community. The winners will be known on August 6.

There is a new official site for Amigo at www.amigomoviephil.com with a bunch of new BTS photos, production stills and info. The film’s Facebook page has some great looking posters, too. The film opens in the Philippines on July 6.

Garret talked to FOX25 about Raising Hope in recent days. The video is embedded below.

Here is the synopsis for tonight’s episode, “The Sniffles:”

When Hope catches a cold, Virginia (Martha Plimpton) goes into panic mode because the family doesn’t have health insurance, so she locks Maw Maw (Cloris Leachman) in her bedroom to avoid getting sick. However, when Jimmy (Lucas Neff) realizes that he can’t afford to take Hope to a doctor without insurance, he figures out a way to secure a second job at the grocery store where Sabrina (Shannon Woodward) works.

The episode airs at 9 pm on Fox. Pictures are in this post and you can see some promos at fox.com/raisinghope.

Proceed to video (because I can’t turn off autoplay)…
END_OF_DOCUMENT_TOKEN_TO_BE_REPLACED

Updates on several fronts this week.

Winter’s Bone has been nominated for a British Independent Film Award in the Best Foreign Film category. The winners will be announced on December 5.

Amigo was screened at AFI Fest 2010 the other day. Hollywood.com has a few pictures. Hollywood Reporter caught up with Garret at the event and got him to share a few details about the upcoming guest stars on Raising Hope, Amy Sedaris and Jason Lee.  Hit the link for the spoilers. Here’s another interesting snippet:

Dillahunt has his eye on Dexter and Boardwalk Empire as TV shows he’d like to appear in, but there’s another he wants to try out.

“I’d say [Starz’s] Spartacus, but I don’t want to have to wear a loincloth. I’d be pale and hairy. Who knew Spartacus shaved down so much, right?” Dillahunt said with a laugh.

Was he surprised by Raising Hope’s full-season order?

“Not really. I think it’s a really good show. In this climate, there’s no telling what’s going to happen, but I thought it deserved it. I’m happy about it. And I don’t die in it,” Dillahunt joked. [THR]

Tyler Shields did another photoshoot with Garret, this time also with Izabella Miko (that’s Carrie from Deadwood) and Ali Cobrin. You can see the pictures here.

And another clip from Oliver Sherman showed up on YouTube. It’s a scene with Garret and Molly Parker. The film has been added to the Whistler Film Festival lineup and will be screened there on December 4 (see listing).

Okay, three new(ish) interviews today, but first the press release for Raising Hope 1×09, “Blue Dots,” which airs in about a month (pics in the post are from that episode):

And there were a bunch of reports yesterday saying that Jason Lee from My Name Is Earl (and, yeah, a bunch of Kevin Smith movies) will make a guest appearance in an episode titled “Burt Rocks” and play “Smokey Daniels, a washed-up rock star who is hired as the lead act for ‘Grocery-Palooza,’ a rock concert at the grocery store where Sabrina works.”

Interviews after the jump. 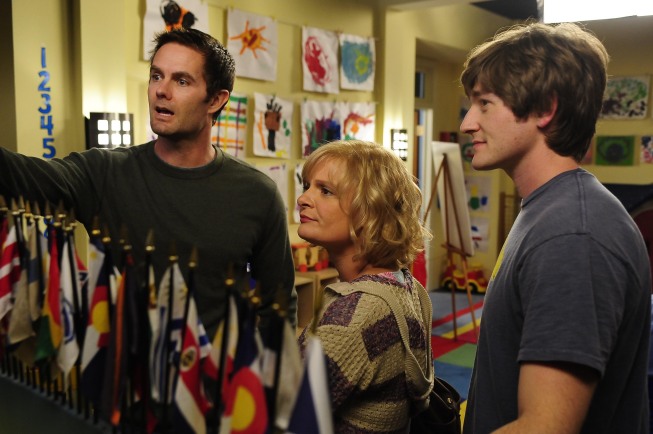 There is one from an event that took place a couple of days ago (Environmental Media Association Celebrates 2010 EMA Awards) over at Getty Images.

This one showed up at PopStar.com yesterday (follow the link for the whole article) and it’s pretty great:

For those who have not seen [Raising Hope] yet, give us what you think is the number one reason to tune in.

I think in the span of twenty two minutes of our stories, you will actually make an audible laugh sound, and you will feel good at the end of the show. It feels like you’re dealing with real people, even though the situations are really exploded. I kind of feel like I know people like this. They’re just good people, trying to make a go of it, having a hard time but managing to keep a sense of humor and a sense of, believe it or not, family.

You almost hate to say it, but it’s sort of like the times. I was going to say this country, but I guess this whole world is going through this hard time right now. I think that’s another reason our show sort of makes people feel OK. It’s a real product of the times. (…)

Who are some of the writers you most admire, and have perhaps influenced you along the way?

Well there’s so many. I collect books, and I like all kinds of books. That’s probably not surprising. Obviously I love Cormac McCarthy. I’ve been reading him since college, and I’ve made a silent pact with myself to be in every movie made of his stuff. So far, I’m in two. Another one is Ron Hansen, who wrote Jesse James and some incredible other books that I think would be great movies as well.

We met a lot of cool dudes off of Deadwood, because they were all fans of that show. Tom Franklin is another great guy. I seem to be drawn to sort of Southern male authors, it seems. But I also love fantasy stuff. I’ve become friends with this guy, Joe Abercrombie who writes these really interesting, believable books. He’s British. I guess that would be in the fantasy genre. Sherman Alexie is great. He’s an American author.

I could go all day, and it would be boring.

And this one is about a month old, but I just caught it:

And here is a behind-the-scenes clip, probably from the same day:

Two new interviews this week. A few snippets are below and you can follow the links to read the rest. The pictures are from Raising Hope 1×08, “The Sniffles,” which airs on November 8. 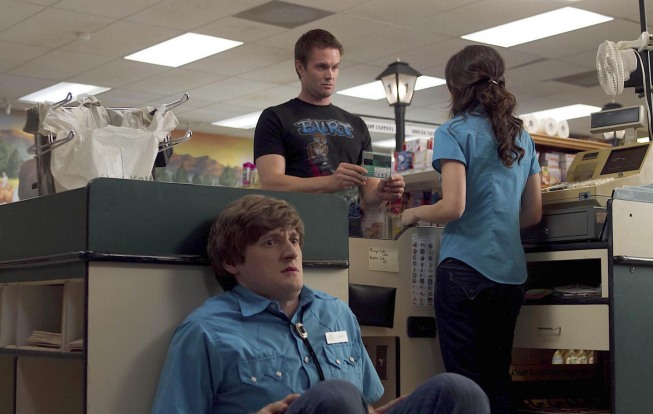 MG: Congratulations on Fox giving the show a full season order, what can we expect from the rest of the season?
GD: I am really happy about that. It is the kind of show that will build a following. People are going to want to buy the box set of this show. I am really happy that they recognized that and they are grooming us for a long life. We are shooting our Thanksgiving episode right now. We did a Halloween one. We also have a Christmas episode in the pipeline. It is not all baby jokes [laughs]. You really get to know this family. Everyone takes stage at one time or another. There are all kinds of stories to be told here. Keep tuning it and keep telling your friends. (…)

MG: What else do you have in the works?
GD: Well “Raising Hope” is taking up a lot of my time but I do have a couple of films. I actually just saw them at the Toronto Film Festival. I ended up doing “Hope” because I wanted something can could help me pay for my film career. The kind of movies I like, get drawn to and get offered are usally low budget affairs. Even though I love them, I also need to pay the rent. Thank God, I have found this incredible comedy. It could end up being the best job of my career. One of the films is called “Oliver Sherman” and the other is called “Amigo”. “Amigo” is a John Sayles film about the Philippine-American War. They are actually having a screening in LA on Nov.6th at the Grauman’s Chinese Theatre. “Oliver Sherman” is with me and Donal Logue and Molly Parker. It is about a couple of veterans and dealing with coming home. I am really proud of that one. [MovieMikes.com] 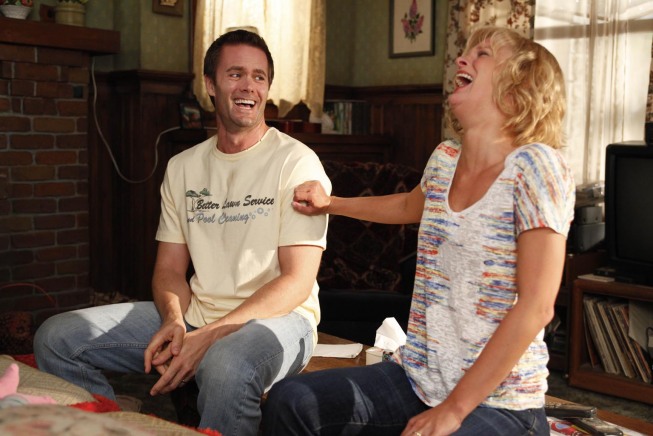 How does it feel to star on one of the few new shows this fall that has actually been successful?
The word of mouth seems really good on the show. It feels great, I feel proud. I don’t think I’ve ever been on a show that has been as universally praised. Even Deadwood was more of a cult following. (…)

Do you have any scenes that you’re particularly fond of?
Well, one of my favorite ones to work on — besides just about any scene from Deadwood — was my scene with Brad Pitt in Assassination of Jesse James. That was just a fun day.

That’s a film that continues to gain stature as the years progress.
It’s sort of enjoying retroactive respect. I think it’s beautiful and I think it will remain one of my favorite projects that I’ve ever been involved with as long as I live.

And what about a scene that you weren’t in?
You know one scene I always think about is in The Godfather, when Marlon Brando’s in the hospital. Al Pacino arrives there and enlists the help of the baker to protect his father. The two of them stand outside and the baker fiddles with a cigarette lighter, but Pacino’s hands are rock steady. That’s when we sort of realize that he can do this. [Movieline.com] 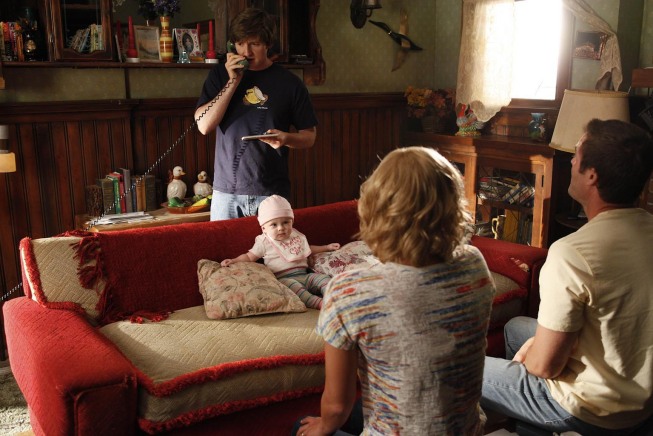